is a common low back disorder. It is one of the most common diseases that produces low back pain and/or leg pain in adults. A herniated disc is a displacement of disc material (nucleus pulposus or annulus fibrosis) beyond the intervertebral disc space. This herniation process begins from failure in the innermost annulus rings and progresses radially outward. The damage to the annulus of the disc appears to be associated with fully flexing the spine for a repeated or prolonged period of time. The nucleus loses its hydrostatic pressure and the annulus bulges outward during disc compression. Other names used to describe this type of pathology are: prolapsed disc, slipped disc or spinal disc herniation, herniated nucleus pulposus and discus protrusion.

It is a medical condition affecting the spine in which tear in outer fibrous ring of IV disc allows soft central portion to bulge out beyond the damaged outer ring. This condition occurs when soft center of spinal disc pushes disc through a crack in the tougher exterior casing. It occur rarely in children, and are most common in young and middle-aged adults. A herniation may develop suddenly, or gradually over weeks or months.

Protrusion is usually posterolateral into vertebral canal. Protruded disc usually compresses next lower nerve as the nerve crosses the level of disc in its path to its foramen. (Example: protrusion of L5 usually affects S1).

It is less frequent. A protruded disc above 2nd vertebra may compress the spinal cord itself or may lead to Cauda Equina Syndrome.

Nerve root compression happens above the level of herniation. L4 nerve root is most often involved.

Physical therapy programmes are often recommended for the treatment of pain and restoration of functional and neurological deficits associated with symptomatic disc herniation. 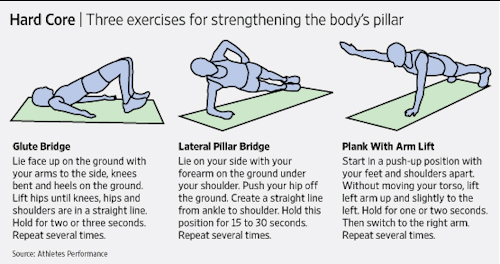 It is preferred to passive modalities.
There are a number of exercise programmes for the treatment of symptomatic disc herniation eg:

They are a common type of therapeutic exercise prescribed for patients with symptomatic disc herniation.

Different studies have shown that a combination of different techniques will form the optimal treatment for a herniated disc. Exercise and ergonomic programs should be considered as very important components of this combined therapy.

General rules for exercise/ Do and Donts

A herniated disk, which can occur in any part of the spine, can irritate a nearby nerve. Depending on where the herniated disk is, it can result in pain, numbness or weakness in an arm or leg.
Many people have no symptoms from a herniated disk. Surgery is usually not necessary to relieve the problem.

Most herniated disks occur in the lower back, although they can also occur in the neck. Signs and symptoms depend on where the disk is situated and whether the disk is pressing on a nerve. They usually affect one side of the body.

People who have a herniated disk often have radiating numbness or tingling in the body part served by the affected nerves.

Muscles served by the affected nerves tend to weaken. This can cause you to stumble, or affect your ability to lift or hold items.

You can have a herniated disk without symptoms. You might not know you have it unless it shows up on a spinal image.

When to see a doctor

Seek medical attention if your neck or back pain travels down your arm or leg, or if you also have numbness, tingling or weakness.

Factors that can increase your risk of a herniated disk include:

Excess body weight causes extra stress on the disks in your lower back.

People with physically demanding jobs have a greater risk of back problems. Repetitive lifting, pulling, pushing, bending sideways and twisting also can increase your risk of a herniated disk.

Some people inherit a predisposition to developing a herniated disk.

It’s thought that smoking lessens the oxygen supply to the disk, causing it to break down more quickly.

Just above your waist, your spinal cord ends. What continues through the spinal canal is a group of long nerve roots that resemble a horse’s tail (cauda equina).

Rarely, disk herniation can compress the entire spinal canal, including all the nerves of the cauda equina. Rarely, emergency surgery might be required to avoid permanent weakness or paralysis.

Seek emergency medical attention if you have:

To help prevent a herniated disk, do the following:

What’s the difference between a bulging disk and a herniated disk?

Answer From Randy A. Shelerud, M.D.

Disks act as cushions between the vertebrae in your spine. They’re composed of an outer layer of tough cartilage that surrounds softer cartilage in the center. It may help to think of them as miniature jelly doughnuts, exactly the right size to fit between your vertebrae.

Disks show signs of wear and tear with age. Over time, disks dehydrate and their cartilage stiffens. These changes can cause the outer layer of the disk to bulge out fairly evenly all the way around its circumference — so it looks a little like a hamburger that’s too big for its bun.

A bulging disk doesn’t always affect the entire perimeter of a disk, but at least a quarter if not half of the disk’s circumference is usually affected. Only the outer layer of tough cartilage is involved.

A herniated disk, on the other hand, results when a crack in the tough outer layer of cartilage allows some of the softer inner cartilage to protrude out of the disk. Herniated disks are also called ruptured disks or slipped disks, although the whole disk does not rupture or slip. Only the small area of the crack is affected.

Compared with a bulging disk, a herniated disk is more likely to cause pain because it generally protrudes farther and is more likely to irritate nerve roots. The irritation can be from compression of the nerve or, much more commonly, the herniation causes a painful inflammation of the nerve root.
If an imaging test indicates that you have a herniated disk, that disk might not be the cause of your back pain. Many people have MRI evidence of herniated disks and have no back pain at all.